St John of the Cross

Juan de Yepes y Álvarez (1542-1591) worked alongside St Teresa in her reform of the Carmelite Order. Unlike Teresa he grew up in poverty, and encountered deep suffering in his work nursing men with syphilis. This compassion for human pain drew him into the mystery of the crucified Christ even as a young man. In 1568 he took the name John of the Cross and began to live in a reformed Carmelite monastery. His involvement in the reform was controversial and he was imprisoned by members of his own order. However, John was also a much-loved confessor and spiritual director in his lifetime, and is well known for his beautiful poetry and commentaries on prayer and the spiritual life.

John is famous for his references to the Dark Night. As someone who speaks through imagery and poetry, in sensual and textured words full of nature and mystery, John shows us glimpses of God working in hidden and even indescribable ways. He is a mystic of the apophatic tradition, where God is sensed in absence and known in unknowing.

He was canonised in 1726 and is a Doctor of the Church. 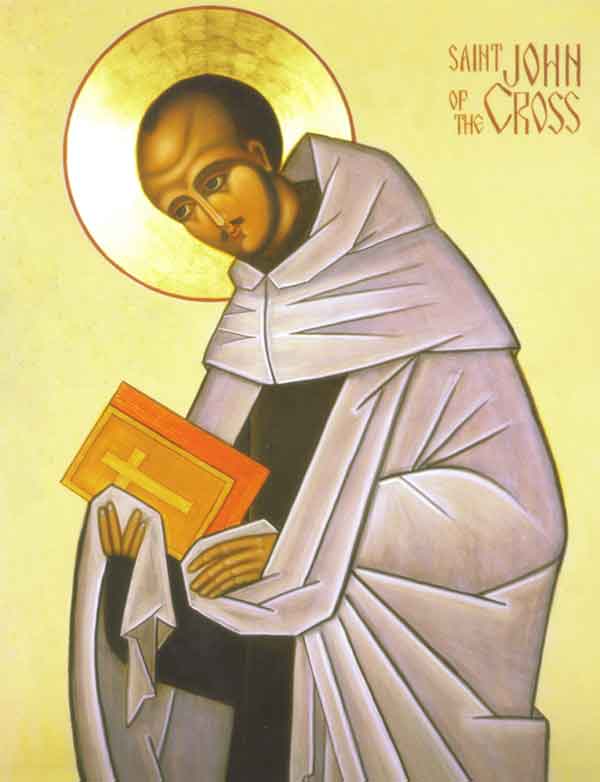 O living flame of love
that tenderly wounds my soul
in its deepest centre! Since
now you are not oppressive,
now consummate! if it be your will:
tear through the veil of this sweet encounter!
O sweet cautery,
O delightful wound!
O gentle hand! O delicate touch
that tastes of eternal life
and pays every debt!
In killing you changed death to life.
O lamps of fire!
in whose splendours
the deep caverns of feeling,
once obscure and blind,
now give forth, so rarely, so exquisitely,
both warmth and light to their Beloved.
How gently and lovingly
you wake in my heart,
where in secret you dwell alone;
and in your sweet breathing,
filled with good and glory,
how tenderly you swell my heart with love.
Stanzas the Soul Recites in Intimate Union with God

Mine are the heavens and mine is the earth. Mine are the nations, the just are mine, and mine the sinners. The angels are mine, and the Mother of God, and all things are mine; and God himself is mine and for me, because Christ is mine and all for me. What do you ask, then, and seek, my soul? Yours is all of this, and all is for you. Do not engage yourself in something less, nor pay heed to the crumbs which fall from your Father's table. Go forth and exult in your Glory! Hide yourself in It and rejoice, and you will obtain the supplications of your heart.
Prayer of a Soul taken with Love