Edith Stein (1891-1942) was a philosopher and a German Jewish convert to Catholicism. As a young academic she was a pioneer of education for women and their full participation in intellectual life. Her philosophical studies took her into a deeper search for meaning, resulting in her encounter with Christ. When lent a copy of the Life of St Teresa, Edith read it in a night and concluded: this is the truth.

Facing strong opposition from her Jewish family, Edith was received into the Catholic Church and continued to seek her calling. This search led her to Carmel, where she took the name Teresa Benedicta of the Cross. For her, the Cross was a means of entering deeply into the mystery of suffering, on behalf of and with her people. She was arrested in August 1942 and was ultimately killed at Auschwitz. She is commemorated as a martyr. 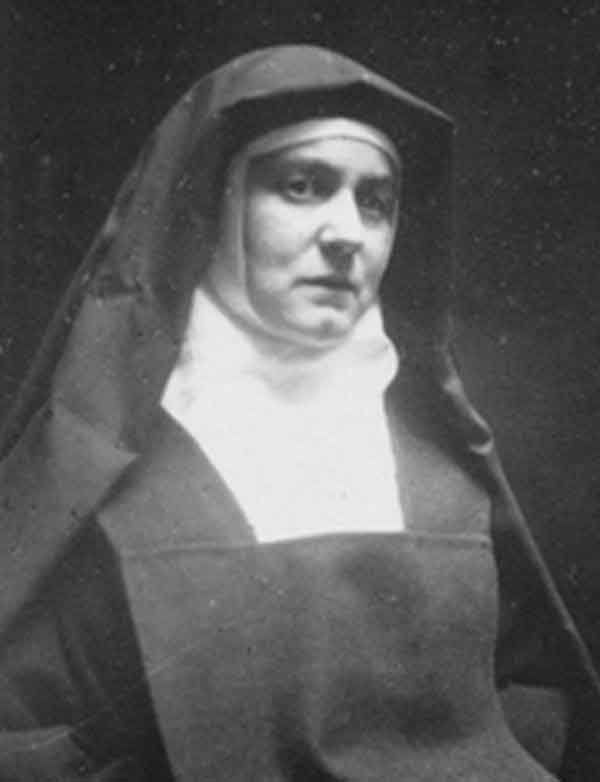 But because being one with Christ is our sanctity, and progressively becoming one with him our happiness on earth, the love of the cross in no way contradicts being a joyful child of God. Helping Christ carry his cross fills one with a strong and pure joy, and those who may and can do so, the builders of God’s kingdom, are the most authentic children of God. And so those who have a predilection for the way of the cross by no means deny that Good Friday is past and that the work of salvation has been accomplished. Only those who are saved, only children of grace, can in fact be bearers of Christ’s cross. Only in union with the divine Head does human suffering take on expiatory power. To suffer and to be happy although suffering, to have one’s feet on the earth, to walk on the dirty and rough paths of this earth and yet to be enthroned with Christ at the Father’s right hand, to laugh and cry with the children of this world and ceaselessly to sing the praises of God with the choirs of angels - this is the life of the Christian until the morning of eternity breaks forth.
Love of the Cross

Today I stood with you beneath the cross,
And felt more clearly than I ever did
That you became our Mother only there.
Even an earthly mother faithfully
Seeks to fulfil the last will of her son.
But you became the handmaid of the Lord.
The life and being of the God made Man
Was perfectly inscribed in your own life.
So you could take your own into your heart,
And with the lifeblood of your bitter pains
You purchased life anew for every soul.
You know us all, our wounds, our imperfections;
But you also know the celestial radiance
Which your Son’s love would shed on us in heaven.
Thus carefully you guide our faltering footsteps,
No price too high for you to lead us to our goal.
But those whom you have chosen for companions
To stand with you around the eternal throne,
They here must stand with you beneath the cross,
And with the lifeblood of their own bitter pains
Must purchase heavenly glory for those souls
Whom God’s own Son entrusted to their care.

Good Friday 1938, Standing with you at the Cross