Teresa Sánchez de Cepeda y Ahumada (1515-1582) came from a converso family in Spain. She entered the Monastery of the Incarnation in Avila in 1535. She was a popular and attractive woman, blessed with many friends and sought after for her lively and outgoing personality. But she struggled for many years with a sense that she was called to go deeper in her love of God, and that she was not responding fully to his call. She writes graphically of the sense of being pulled in opposite directions. Gradually, through prayer and wise spiritual direction, she was drawn to a deeper austerity and closeness to Jesus. Meanwhile she became troubled by the events of her time and saw the need for a life focussed wholly on prayer. In 1562 she initiated a reform which ultimately led to the Discalced Carmelite life. Teresa wrote many books and letters, and made numerous foundations for both men and women. She was made a Doctor of the Church in 1970.

The icon shown here was written by the Melkite sisters from the Monastery of the Annunciation in Nazareth. The icon depicts union with Jesus at the centre of the soul's interior castle. The butterfly is a symbol of spiritual transformation. Teresa holds in her hand a copy of her prayer: 'Let nothing trouble you, let nothing frighten you, all things are passing, God alone is unchanging, patience obtains everything, who possesses God wants for nothing, God alone suffices.' The four waters of prayer are shown, and St Joseph keeps protective watch over the entrance. 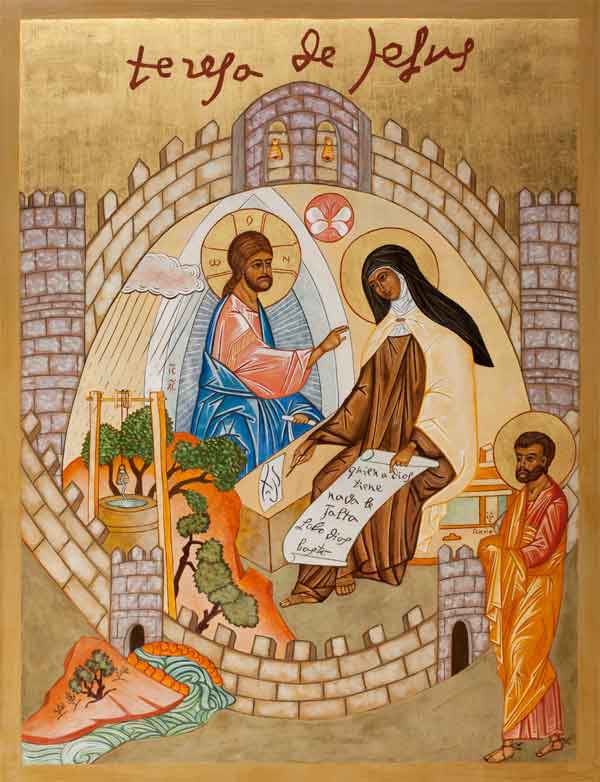 We consider our soul to be like a castle made entirely out of a diamond or of very clear crystal, in which there are many rooms, just as in heaven there are many dwelling places. For in reflecting upon it carefully, Sisters, we realise that the soul of the just person is nothing else but a paradise where the Lord says he finds his delight. So, then, what do you think that abode will be like where a King so powerful, so wise, so pure, so full of all good things takes his delight? I don’t find anything comparable to the magnificent beauty of a soul and its marvellous capacity.
Interior Castle 1

Beginners must realize that in order to give delight to the Lord they are starting to cultivate a garden on very barren soil, full of abominable weeds. His Majesty pulls up the weeds and plants good seed. Now let us keep in mind that all of this is already done by the time a soul is determined to practice prayer and has begun to make use of it. And with the help of God we must strive like good gardeners to get these plants to grow and take pains to water them so that they don’t wither but come to bud and flower and give forth a most pleasant fragrance to provide refreshment for this Lord of ours. Then He will often come to take delight in this garden and find His joy among these virtues. But let us see now how it must be watered so that we may understand what we have to do, the labour this will cost us, whether the labour is greater than the gain, and for how long it must last. It seems to me that the garden can be watered in four ways. You may draw water from a well (which is a lot of work). Or you may get it by means of a water wheel and aqueducts in such a way that it is obtained by turning a crank on the water wheel. (I have drawn it this way sometimes – the method involves less work than the other, and you get more water). Or it may flow from a river or stream. (The garden is watered much better by this means because the ground is more fully soaked, and there is no need to water so frequently – and much less work for the gardener). Or the water may be provided by a great deal of rain. (For the Lord waters the garden without any work on our part – and this way is incomparably better than all the others mentioned).
Life 11. 6-7