St Thérèse of the Child Jesus

Thérèse Martin (1873-1897) entered the Lisieux Carmel at the age of 15. Sometimes called the Little Flower, Thérèse is perhaps best known for her ‘Little Way’ which teaches us that everything, no matter how small, may be done for God with love. She had a profound trust in the mercy of God, who would understand her littleness and receive her offerings. For Thérèse this littleness encompasses all our experiences of weakness or failure that, when offered with love, can be used by God to bring life and hope.  In her words, 'all is grace'- everything can be used for good.

Thérèse wrote the Story of a Soul, her autobiography, at the request of her Prioress, as well as letters, poems, plays and prayers. She died of tuberculosis at the age of twenty-four. Soon after her death, this hidden young nun began to be known and deeply loved through her writings, and she touched hearts throughout the world. 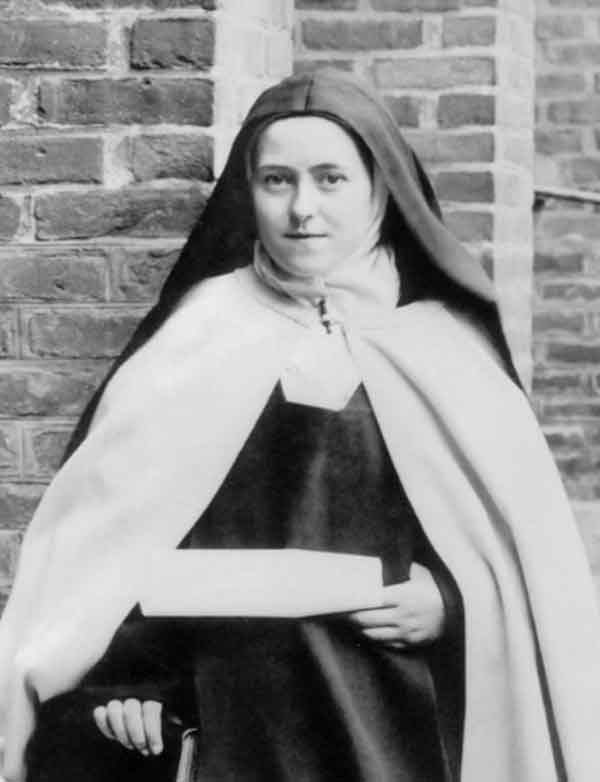 Charity gave me the key to my vocation. I understood that if the Church had a body composed of different members, the most necessary and most noble of all could not be lacking to it, and so I understood that the Church had a heart and that this heart was burning with love. I understood it was Love alone that made the Church members act, that if Love ever became extinct, apostles would not preach the Gospel and martyrs would not shed their blood. I understood that love comprised all vocations, that love was everything, that it embraced all times and places - in a word, that it was eternal. Then, in the excess of my delirious joy, I cried out: O Jesus, my Love, my vocation, at last I have found it. My vocation is Love.
Story of a Soul

I look upon myself as a weak little bird, with only a light down as covering. I am not an eagle, but I have only an eagle’s eyes and heart. In spite of my extreme littleness I still dare to gaze upon the Divine Sun, the Sun of Love, and my heart feels within it all the aspirations of an Eagle.
The little bird wills to fly towards the bright Sun that attracts its eye, imitating its brothers, the Eagles, whom it sees climbing up toward the Divine Furnace of the Holy Trinity. But alas! The only thing it can do is raise its little wings; to fly is not within its little power!
What then will become of it? Will it die of sorrow at seeing itself so weak? Oh no! The little bird will not even be troubled. With bold surrender, it wishes to remain gazing upon its Divine Sun. Nothing will frighten it, neither wind nor rain, and if dark clouds come and hide the Star of Love, the little bird will not change its place because it knows that beyond the clouds its bright Sun still shines on and that its brightness is not eclipsed for a single instant.
At times the little bird’s heart is assailed by the storm, and it seems it should believe in the existence of no other thing except the clouds surrounding it; this is the moment of perfect joy for the poor little weak creature. And what joy it experiences when remaining there just the same! And gazing at the Invisible Light which remains hidden from its faith!
O Jesus, up until the present moment I can understand Your love for the little bird because it has not strayed far from You. But I know, and so do You, that very often the imperfect little creature, while remaining in its place (that is, under the Sun’s rays), allows itself to be somewhat distracted from its sole occupation. It picks up a piece of grain on the right or on the left; it chases after a little worm; then coming upon a little pool of water, it wets its feathers still hardly formed. It sees an attractive flower and its little mind is occupied with this flower. In a word, being unable to soar like the Eagles, the poor little bird is taken up with the trifles of earth.
And yet after all these misdeeds, instead of going and hiding away in a corner, to weep over its misery and to die of sorrow, the little bird turns toward its beloved Sun, presenting its wet wings to its beneficent rays. It cries like a swallow and in its sweet song it recounts in detail all its infidelities, thinking in the boldness of its full trust that it will acquire in even greater fullness the love of Him who came to call not the just but sinners. And even if the Adorable Star remains deaf to the plaintive chirping of the little creature, even if it remains hidden, well, the little one will remain wet, accepting its numbness from the cold and rejoicing in its suffering which it knows it deserves.
O Jesus, Your little bird is happy to be weak and little. What would become of it if it were big? Never would it have the boldness to appear in Your presence, to fall asleep in front of You. Yes, this is still one of the weaknesses of the little bird: when it wants to fix its gaze upon the Divine Sun, and when the clouds prevent it from seeing a single ray of that Sun, in spite of itself, its little eyes close, its little head is hidden beneath its wing, and the poor little thing falls asleep, believing all the time that it is fixing its gaze upon its Dear Star. When it awakens, it doesn’t feel desolate; its little heart is at peace and it begins once again its work of love.
Story of a Soul